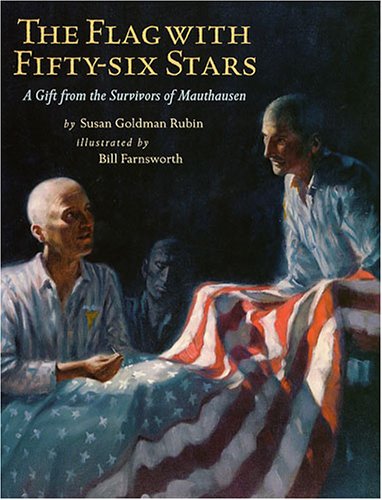 THE FLAG WITH FIFTY-SIX STARS: A Gift from the Survivors of Mauthausen

Although Rubin and Farnsworth have each worked on books about the Holocaust— and , respectively—this is their first joint effort, a testament to the combined power of their talent. The moving and perhaps lesser known WWII story concerns an American flag made by the prisoners of Mauthausen, the Nazi's slave labor camp, positioned to exploit the nearby Austrian granite. When liberation by the Allies seemed imminent, a group of prisoners stitched together the flag from scrounged fabric and memory, adding an extra row of stars (a photograph on the penultimate spread and on the back cover show the actual flag, which is now at the Simon Wiesenthal Center in Los Angeles). Working in a seamless partnership, Rubin and Farnsworth open the book with a compelling overview of Mauthausen and a glimpse of SS chief Heinrich Himmler's almost unfathomable cruelty ("No one would return from [the camps] alive, he said"). The second half describes the flag's furtive creation and emotional presentation to the thunderstruck Americans troops. Rubin sensitively balances narrative momentum with the voices of real people (she quotes both survivors and liberators, some of whom she interviewed). Farnsworth's realistic oil-on-linen paintings are nothing short of extraordinary. The quietly accomplished compositions in predominantly grey and brown shades never minimize the horror and suffering that took place within Mauthausen, yet his portraits of the prisoners make clear that hope is inextinguishable, even in a world that has abandoned all sense of humanity. Ages 6-10.