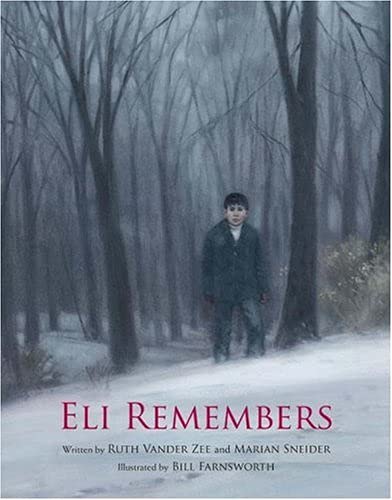 When Eli and his family travel to Lithuania, he finally learns why sadness clouds their Rosh Hashanah gatherings: his great-grandmother Gussie's father and six siblings were among the 80,000 Jews massacred in the Ponar Forest near Vilnius during WWII. Vander Zee ( ) and Sneider, whose experiences inspired the book, use simple, direct language to follow Eli's trajectory from puzzlement and ignorance to horrific realization and resolve. As the family gathers at the site of the massacre, the prose is unsparing and unrushed, occupying several pages. “And then they fell... into this pit,” Eli's father explains, after recounting how Jews were rounded up and shot in the back. “The next day their bodies were burned.” Farnsworth ( ) freezes the action in his realistic oil paintings, an approach that makes the most of the emotionally wrenching subject matter. He portrays Eli's reaction in a stunning close-up—his face is expressionless except for his sad, wide eyes. But in this moment when innocence is lost (Eli's first response is the utterly authentic, “Were children killed too?”), a sense of maturity dawns. Eli realizes that the world is bigger than his own experience, and that each generation is entrusted with the responsibility and sacredness of memory. Ages 8-12.