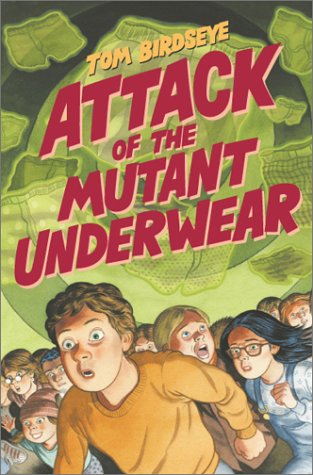 ATTACK OF THE MUTANT UNDERWEAR

Despite its outlandish cover art and title, Birdseye's ( ) down-to-earth novel presents the journal of a chatty fifth grader determined to change his image as he enters a new school. Cody, however, gets off to a rather rocky start: the day before school opens, a girl sees him in his underwear through an open dressing-room door as he tries on jeans. Though Amy—who turns out to be a classmate—doesn't share this incident with their peers, Cody's embarrassment triggers recurrent nightmares featuring underwear-related debacles. The boy's intermittently bumbling attempts to be the cool "New Me" rather than the goofy "Old Me" lead to some thought-provoking choices on Cody's part, some comically calamitous episodes and some poignant moments. For instance, after seeing the popular boys shooting hoops, Cody writes, "I would have played, too, if they'd have asked me. But it was starting to rain anyway— —so I guess it didn't matter." The author hits a few shaky notes (e.g., Cody's disdain for cleaning his cat's litter box becomes tedious; his infatuation for Amy stretches credibility, as when he refers to himself as "Loverboy" in his journal). But many passages compensate for them—including the way Cody couches his bungling of the talent show as a step-by-step formula for creating a "really good disaster." Ages 8-12.