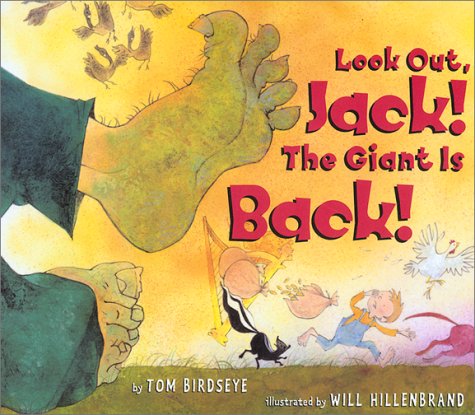 LOOK OUT, JACK! THE GIANT IS BACK!

Fee-fi-fo-fum, this post–fairy tale/tall tale is just humdrum. Birdseye () employs some awkward contrivances ("Jack and his mama... hopped on a boat to America") to move this Jack and the Beanstalk continuation to a colorful homey setting in North Carolina. The late giant's big brother shows up on U.S. shores, too, eager to retrieve the coins, harp and hen that lays golden eggs, which he believes are rightly his. Jack and his mother plan to outwit the giant using some good Southern cooking, though the mangy guy fights back in a goofy development involving smelly feet. Kids may love the raucous mountain phrases tossed around and the silly crescendo here, but Birdseye's forced story line and descriptions never really gel. Hillenbrand's () mixed media artwork (crayon, colored pencil, oil) on the other hand, soars. He captures the rambunctious nature of the author's premise, all the while depicting Jack as a sweet-faced kid with more than a few tricks up his sleeve. The details—Jack's ramshackle home, the rolling mountains and a pair of putrid green giant feet (cracked toenails and all) supply the comedy. Ages 4-8.