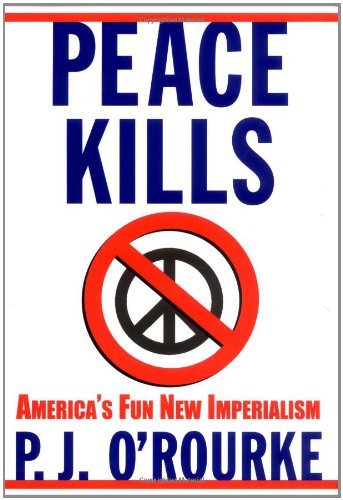 O'Rourke has made a career out of telling people off. As a foreign correspondent for the and he has demonstrated a flair for sarcasm and an aptitude for making people laugh. In his 11th book, however, this provocateur par excellence presents a more sober and, alas, less funny, take than usual, this time in essays on American foreign policy, including visits to several important countries on the international scene. Starting with Kosovo, he comments on the Serbian-Albanian conflict, then makes his way to Israel, Egypt, Kuwait and Iraq. Other entries look at the effects of September 11 on the U.S. home front, which includes poking fun at airport search techniques and a clever deconstruction of a 2001 statement on peace and social justice signed by 103 Nobelists. O'Rourke's book does many of the things a conservative bestseller is supposed to do: it's irreverent, in-your-face and often offensive (Hillary Clinton: "the furious harridan on the White House third floor"). Yet O'Rourke, the funny man of foreign politics, seems less interested in humor here than in slightly skewed reporting. His articles on Israel and Egypt, for example, are basically descriptive, a diary account of where he went, what he saw, the hotels he stayed in, the food he ate, interrupted every so often by O'Rourke's trademark non sequitur humor. The author's fans probably won't mind the slight shift in direction, though they will wish for more laughs; O'Rourke is one of the most popular conservative authors around and this book, like his others, should find a happy nest on national bestseller lists. .