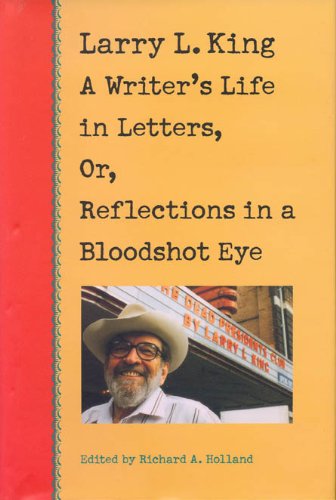 Larry L. King: A Writer's Life in Letters, Or, Reflections in a Bloodshot Eye

Before he wrote the 1979 rowdy musical comedy Broadway hit The Best Little Whorehouse in Texas, King worked a variety of jobs, leaving a trail of sometimes funny, often bilious letters to editors, writers, politicians and assorted others. Spanning the years 1954 to 1999, this collection of correspondence follows King as he works as a congressional assistant to Jim Wright and a lobbyist in Washington, where he witnesses the stunned, slightly crazed reaction to the assassination of JFK by the Texas congressional delegation; as a novelist (The One-Eyed Man); playwright (The Night Hank Williams Died); essayist and cultural commentator (Confessions of a White Racist, which earned him an enthusiastic letter of praise from Maya Angelou); Harper's editor under Willie Morris; and New York carouser who hobnobbed with the East Coast literati while remaining fiercely proud of his West Texas roots. An epistolary autobiography of sorts, this unbowdlerized scrapbook of rants, wisecracks, stories, scrapes and reminiscences lets us watch King as he resourcefully reinvents himself. What saves this selected correspondence from becoming a whiny, defensive, extended ego trip are King's jibes at William Buckley (""the Rightest in residence of New York City""), Harvard lecturer John Kenneth Galbraith (""he puts me to sleep: drones on in a monotone...""), Aleksandr Solzhenitsyn (""too goddamn wordy""), Norman Mailer, Nelson Rockefeller and other targets. At their best, these letters are brash, funny, pugnacious and charged with their author's renegade energy. Photos. Author tour. (Nov.)
close
Details