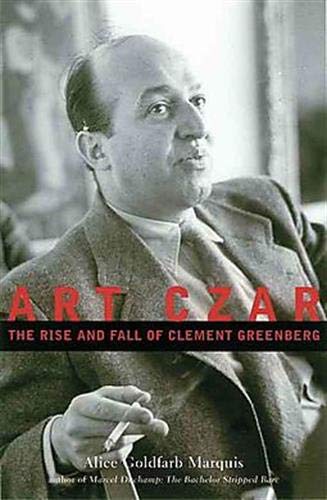 Art Czar: The Rise and Fall of Clement Greenberg

Arguably the dominant American art critic of the 20th century, Clement Greenberg (1909–1994) established the fundamental narrative of modern art—the movement toward total abstraction—that continues to circulate in the art world to this day. In this smart, lively, thorough biography, Marquis defines the many masks the great critic wore and discarded throughout his career: self-hating Jew, camp counselor, college snob, delinquent father, failed fiction writer, power broker. She traces Greenberg's career from its meandering start on the margins of bohemia to its great moment of opportunity when the twin streams of capitalist philanthropy and communist intellectual fashion converged. She follows him through the frothy, postwar era of New York art making and into the days beyond, when Greenberg's rigid system of formal classification ceased to apply to contemporary currents of pop and conceptualism. Along the way are interesting insights into the churning auction prices, the sexual hijinks and the ritual alcoholism that made the good times mythical. Marquis, who has also written biographies of Marcel Duchamp and of MoMA's founding director, Alfred Barr, is especially good at conveying the sensual experience of mid-century New York intellectual life. For all interested in the golden years of the New York art world, and in American intellectual history in general, this volume will fascinate.