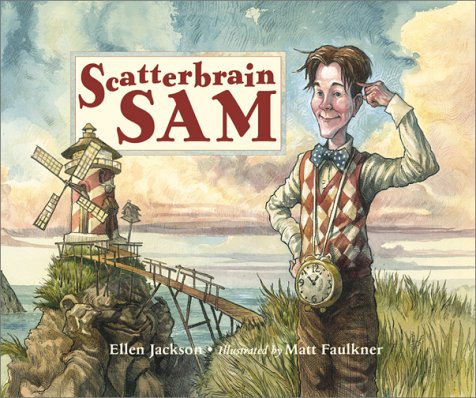 Scatterbrain Sam, a knickers-wearing eccentric with a heart of gold, discovers that brains aren't the most important thing in the world in this rollicking version of an old Welsh folktale. Jackson () moves her kind-hearted but slow-witted hero to small-town America and gives him two sharp womenfolk to help him in his search for more smarts. The town's Widder Woman agrees to make a potion to glue Sam's brains together, but requires the answers to several riddles in exchange. Maizie Mae, Sam's pilot sweetheart, always arrives at his side in time to supply the solutions. Anxious for a look at the potion, Maizie topples into the woman's big vat, but Sam saves her in a heartbeat. Maybe he doesn't need the potion after all. "You got some brains gathered together, boy," Widder Woman states flatly, pointing to Maizie Mae. "Hers." Erstwhile political cartoonist Faulkner's () drawings capture Sam's sheepish charm; period-detail sets are enlivened by crackpot additions like high tops–shod horses and grinning coastal rock formations. The combination of the snappy text and silly but sincere adult hero, plus a pack of outlandish whoppers ("The glue raced through Jed MacGruder's barn, hanging the barn door back on its hinges and shoeing a couple of horses"), is sure to entertain scatterbrained and cool-headed readers alike. All ages.