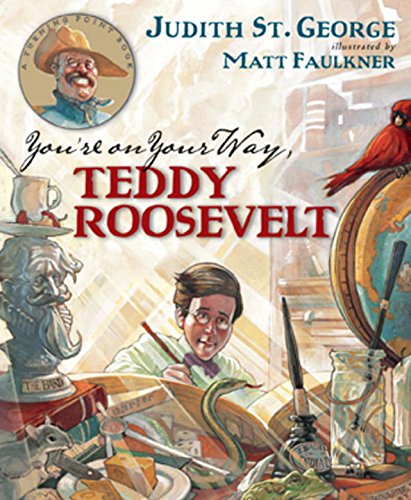 YOU'RE ON YOUR WAY, TEDDY ROOSEVELT

St. George's ( ) anecdotal account of Roosevelt's early years launches the Turning Point Book series, spotlighting a pivotal event in the life of a future president. The author explains that as a child (nicknamed "Teedie") the "pale and puny" Roosevelt suffered from asthma and other ailments. In hopes of improving his health, his parents take the family to the country, where Teedie becomes a lifelong nature lover. The boy begins filling his New York City bedroom with living and dead animals, creating a "museum." When Teedie's father tells him that he has "the mind, but not the body," the lad begins working out with weights and later takes up boxing. He goes on to win 14 out of 15 events at a family field day, in the somewhat anticlimactic conclusion, proving that "by his own strong will, Teedie had at last won the battle for his body." Featuring an earth-toned palette, Faulkner's gouache artwork keeps the mood light. A standout spread spotlights Teedie's impeccably dressed Southern belle mom amidst the roguish body-builders at the gym. The conversational narrative includes some odd details (e.g., when the boy was 10, "Papa even gave Teedie coffee to drink and cigars to smoke to help his breathing"), but readers who identify with the young hero's underdog beginnings may well be inspired by his rise to strength and stature. Ages 5-up.