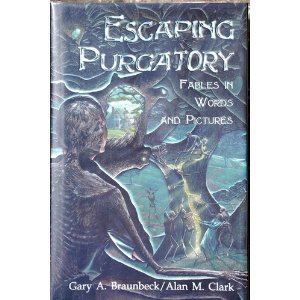 Souls lost in personal limbos of guilt, regret and alienation reveal the depth and horror of purgatory in this dynamic collection of fantasy fiction and art. In the introduction, Braunbeck () interprets the human and supernatural figures moving through the bizarre landscapes of Clark's paintings as "all trying to escape Purgatory." Clark () chips in that some of the five stories and their wraparound frame were written in collaboration, some were inspired by the art, and vice versa—which could explain the unevenness of their telling. The contents are anchored by two greatly varied novellas: "Mr. Hands," a wrenching tale of horror in which the grief-stricken mother of a murdered child conjures a clutching monster to serve as her avenging "Hand of Fate," and "The Big Hollow," a meandering dark fantasy whose sketches of the living dead in a small-town cemetery forced to confront their failures in life seems to owe as much to the as to the weird fiction tradition. There are moments in nearly all of the selections in which the philosophizing overwhelms the narrative, and only "A Host of Shadows," which concisely explores ideas of salvation and redemption through its portrait of an aged and ailing Jack the Ripper, has a plot that adequately supports its ideas. Though these tales may wear their ambitions on their sleeves, they are powered by a sincerity and ingenuousness that will move even the most jaded reader of macabre fiction.