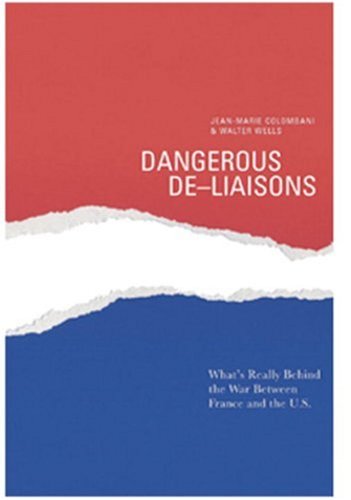 DANGEROUS DE-LIAISONS: What's Really Behind the War Between France and the U.S.

What better way to shed light on the increasingly fractious relationship between France and the United States than a dialogue between two sensitive observers: one American and one French? Colombani is editor of France's most prestigious newspaper, ; Wells is editor of the pre-eminent American newspaper in Europe, the . What makes this book work is that each knows how to argue his country's case persuasively, yet is also capable of recognizing shortcomings. While neither lets the other get away with overly facile or one-sided characterizations, they converge in a mutual recognition of what ails the relationship between the world's two oldest republics and why the division benefits neither. Among the many insights: France is an easy target in the U.S. because there is no French-American voting bloc; France complains about U.S. unilateralism, but President Chirac's scolding of the East Europeans for supporting the U.S. on Iraq sounded like " " On the subject of pre-emptive war, it's pointed out that Napoleon's experiment in such war against Spain and Russia brought down the French empire. Colombani says that because Franklin Roosevelt preferred to court Vichy France rather than Gen. Charles de Gaulle, the French right (exemplified by presidents de Gaulle and Chirac) became anti-American, and the French left pro-American (as exemplified by former president François Mitterrand, who backed George Bush Sr. in the Gulf War). Reader, beware: the candor and intelligence of the dialogue are infectious and certain to inform and soften all but the most die-hard proponents on either side of the divide.