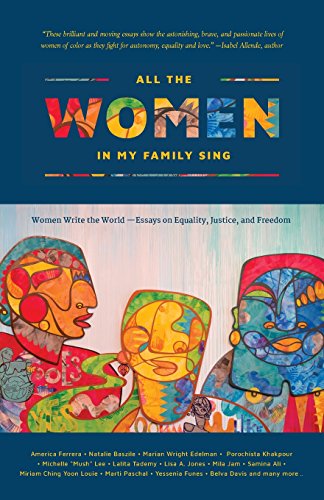 All the Women in My Family Sing

This moving anthology of essays by women of color illuminates the struggles, traditions, and life views of women at the dawn of the 21st century. The 69 authors grapple with identity, belonging, self-esteem, and sexuality, among other topics. Writer Natalie Baszile writes of returning to her father’s native Louisiana as an adult to research her novel, Queen Sugar, only to encounter the humiliating racism her father experienced growing up there in the 1950s. Lalita Tademy, who was the first person in her family to graduate from college, describes the pressures of working her way up the corporate ladder to v-p at Sun Microsystems, a Fortune 500 company. Rhonda Turpin, who is currently serving a 12-year sentence in a federal prison for a nonviolent crime, describes the challenges of parenting while incarcerated. In one of the more gripping essays, novelist Samina Ali endures a heart attack and hundreds of ministrokes, along with liver and kidney failure, while giving birth to her son. Some of the authors are literary luminaries, others first-time essayists, resulting in unevenness. A few of the essays, such as one by a trans woman about her gender transition, barely go into any detail about their subjects. Nevertheless, most of these contributions reflect their authors’ vitality, wisdom, and wide-ranging experiences and backgrounds. (Jan.)

Correction: A previous version of this review incorrectly identified the book's editor.