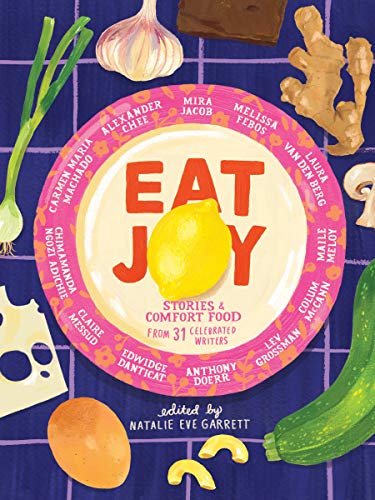 In this delightful anthology, Garrett (The Artists' and Writers' Cookbook, editor) presents culinary essays from notable authors and the dishes associated with them. In “Comfort with Eggs,” short story writer Laura van den Berg, addressing her anorexia as a teen, faces “the ghost of the person who believed it was... reasonable to starve herself to death”; novelist Chantel Acevedo cherishes hours with her grandmother toasting stove-top “Merenguitos” (“gooey like a marshmallow”); and for novelist Rakesh Satyal in “Bake Your Fear,” baking pies was “waving a Pride flag before I could officially come out.” Prominent writers shine, including Colum McCann, Chimamanda Ngozi Adichie, and Alexander Chee, whose story about a juice cleanse entertains. Accompanying recipes often prioritize comfort over ambition: Edwidge Danticat shares diri blan (white rice) on her father’s deathbed; short story writer Carmen Maria Machado mixes Kraft macaroni and cheese with tomato soup and hot dogs in “Meals of My Twenties”; and novelist Anthony Doerr slurps brownie batter in the wilderness in “Homesick at the Outer Edge of the World.” Garrett has selected the best kind of culinary writing—unfussy recipes and heartfelt stories that use food as an avenue for reflection. Foodies and fiction readers alike will devour this excellent collection. [em](Oct.) [/em]

This review has been updated to remove a quoted line that appeared in the review copy PW received but is not in the finished book.