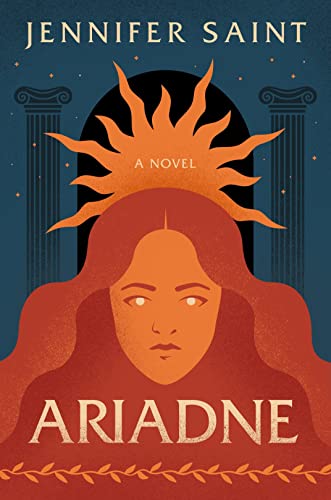 Saint’s enchanting debut retells the myth of the minotaur through the eyes of Ariadne, daughter of King Minos of Crete. Ariadne’s life has always been touched by the gods, as her mother, Pasiphae, is the daughter of Helios, god of the sun. She has also witnessed their wrath, unfairly brought down upon Pasiphae by Poseidon, the sea god, because of Minos’s transgressions against him. Her punishment, to fall into obsessive love with a bull, resulted in the Minotaur, Ariadne’s half-human, half-bull brother. When Theseus, prince of Athens, is sent as part of that city’s annual sacrifice to the Minotaur, a smitten Ariadne helps him defeat the monster and they flee Crete together. Ariadne hoped they would bring her sister, Phaedra, with them, but fickle Theseus breaks his promise, leaving Phaedra behind and abandoning Ariadne on the island of Naxos. The island is the home of Dionysus, god of wine and pleasure, and he takes Ariadne as his wife. Phaedra, meanwhile, is reluctantly married off to Theseus in a political maneuver of her brother’s. As the women navigate their changing positions of power, they court disaster at the hands of both gods and men. Saint expertly highlights how often the women of this world pay the price for the actions of the men around them. Lovers of mythology should snap this up. [em](May) [/em]

Correction: An earlier version of this review mischaracterized a plot point concerning the character Phaedra's brother.