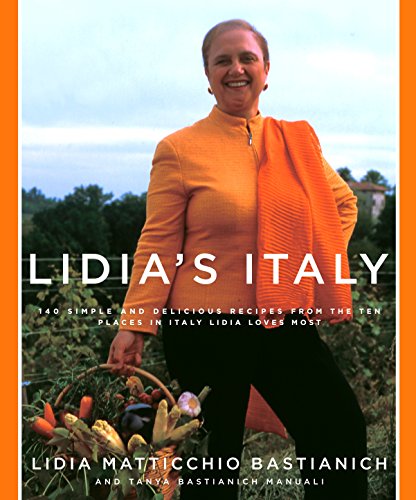 Lidia's Italy: 140 Simple and Delicious Recipes from the Ten Places in Italy Lidia Loves Most

Surely one of the secrets to Lidia Bastianich's success as a television personality is the high quality of her companion books. Bastianich's never seem like mere collections of stills from the show; they impart new information and are full of dishes even dedicated Italophiles may not know, such as Gnocchi Ravioli with Sausage-Spinach Filling and Sage Pudding. However, the concept for her latest show, and as a result this eponymous book, feels slightly haphazard. While Bastianich is to be applauded for overlooking the obvious Tuscan targets like Florence to concentrate instead on the region's less well-known natural beauty in the Maremma area with its mammoth national park, her "places" are inconsistent. They include single cities (Padova and Treviso) and whole regions (Piedmont). And while Bastianich's native Istria offers alluring specialties such as Fresh Pasta Quills with Chicken Sauce, it makes an odd subject for an opening chapter, since it is no longer part of Italy. Bastianich's daughter and coauthor, who runs an Italian tourism company, suggests a handful of sites to visit in each location, be it Spaccanapoli in Naples or a Cistercian abbey 35 miles outside of Turin. Bastianich is probably incapable of creating a truly bad book—the recipes are as functional as they are tempting—but this all-over-the-boot offering is not her best.