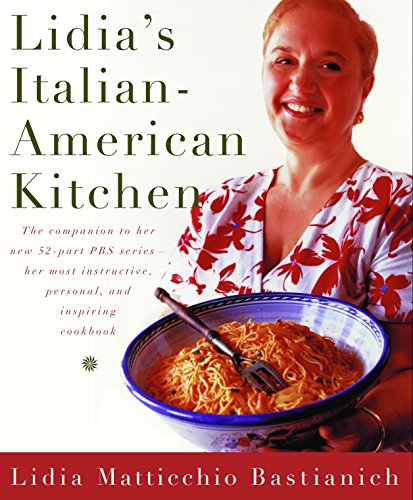 Despite a misleading title (the book offers few stereotypical restaurant-style dishes), readers will be slightly charmed by the book's actual contents (mainly recipes for straight Italian classics) and its author that they'll quickly forget any disappointment. Bastianich (), owner of several restaurants, is simultaneously a beguiling storyteller and a no-nonsense guide. Alongside classics like Tri-Color Salad with Arugula and Radicchio and a more unusual Salad of Dandelion Greens with Almond Vinaigrette and Dried Ricotta, Bastianich provides sidebars on beans, capers and many other ingredients. She also waxes personal: a native of Istria, the region given to Yugoslavia after WWII, she emigrated in 1958 and opened her first restaurant in 1971 at age 24. The stars here, though, are the recipes. Pasta dishes such as Cavatelli with Bread Crumbs, Pancetta, and Cauliflower, and Orecchiette with Braised Artichokes, make fine use of fresh vegetables. Recipes are divided into antipasto, soups, pasta and risotto, pizza, entrées, side dishes and desserts. Desserts include a San Martino Pear and Chocolate Tart and a rich Chocolate Soup from Udine. Bastianich includes restaurant-style Italian-American food such as Spaghetti and Meatballs, and Lobster fra Diavolo with Spaghettini, although she can't resist reducing the latter's sauce to more "Italian" proportions. Color and b&w photos.