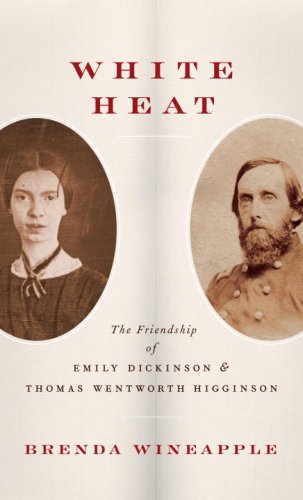 In 1862, Emily Dickinson wrote to Thomas Wentworth Higginson, a noted man of letters and radical activist for abolition and women’s rights, asking if he would look at her poems. He did and recognized immediately their strange power. As Wineapple points out in this brilliant study, Dickinson’s letter marked the blossoming of a complicated lifelong friendship. Although the two met face-to-face only twice, Higginson found Dickinson’s explosive poetry seductive. Drawing on 25 years’ worth of Dickinson’s letters (Higginson’s are lost), Wineapple contests the traditional portrait of her as isolated from the world and liking it that way. In her poems and her letters, Wineapple shows, Dickinson was the consummate flirt, a “sorceress, a prestidigitator in words.” Wineapple resurrects the reputation of Higginson, long viewed as stodgy in his literary tastes (he reviled Whitman) yet who recognized Dickinson’s genius and saw her work as an example of the “democratic art” he fervently believed in. As Wineapple did previously with Hawthorne ( ), she elegantly delves into a life and offers rich insights into a little-known relationship between two of the late–19th century’s most intriguing writers. 32 photos.