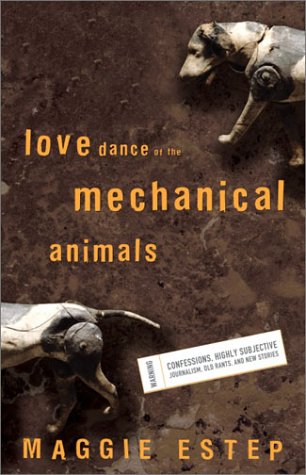 This collection of spoken and journalistic pieces by New York writer-performer Estep is an uneven effort. The "Confessions" fare the worst in the transition from fugitive magazine to book (many of them appeared first in the monthly ): tales of Brooklyn apartment-hunting, short-term shack-ups with German composers and Italian painters, and bikers swilling Pabst Blue Ribbon are fun to read while waiting for the train but start looking awfully alike next to each other in a book. The "Old Rants" section, which collects the spoken-word pieces that rocketed Estep from Lower East Side poetry slams to a Lollapalooza tour (ah, the '90s!), come off with much less urgency than Estep puts into her performances. But Estep's journalistic narratives, including portraits of Iggy Pop, Jerry Stahl and the jockey Chris Antley are charming. In one piece on horse racing, Estep's passion for horses and the seedy world of the racetrack comes through in spades: "[W]e're on the A train heading out to Aqueduct and I've got the Daily Racing Form spread out in my lap and we're sitting with our shoulders touching as the train rattles through the bowels of Queens and I explain how to read each horse's past performance and how to factor in the many many things one has to factor in, from the weight of the jockey to the win percentage of the trainer to the last time the horse raced." This is Estep at her best, as her words rush to meet the minimalist and episodic speed of the race, but such comings together are less frequent here than all but diehard fans will want.