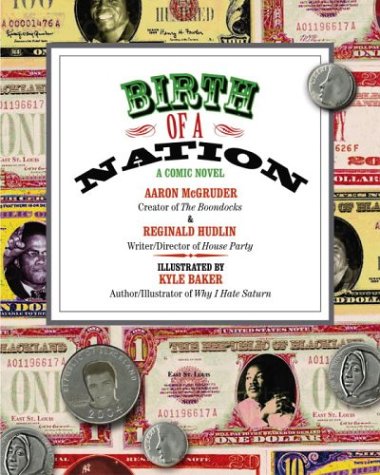 Birth of a Nation: A Comic Novel

creator McGruder, filmmaker Hudlin and cartoonist Baker are a kind of dream team, and this work (drawn in Baker's animation-storyboard style) has a fairly hilarious premise. When the virtually all-black population of East St. Louis, Ill., is disenfranchised en masse in electoral shenanigans that result in a George W. Bush–like Texan governor being elected president, the impoverished city decides to secede from the U.S. Renaming itself "Blackland," the city becomes a wildly rich money-laundering capital. Baker is a gifted caricaturist—every facial expression and bit of body language he comes up with is funny—and the first two-thirds of the book is loaded with witty riffs (a national anthem to the tune of the theme; a fight over whether Tupac or Biggie should be on the nickel) and slyly ferocious jabs at institutional racism and a certain commander-in-chief. The final act, though, falls apart. The U.S. going to war with Blackland over a new alternative energy source should be a natural for comedy, but it bogs down in too-serious drama and a non sequitur battle. even McGruder and Hudlin's snappy dialogue loses steam. The work has the air of an unproduced film treatment—a terrific concept with some impressive talent behind it but not enough follow-through to make it completely satisfying.