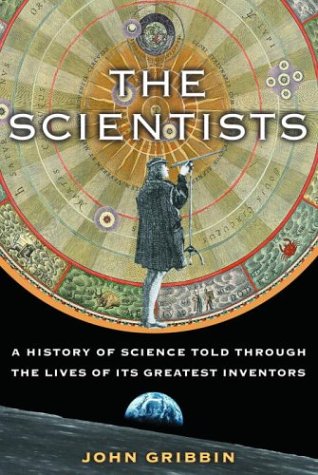 THE SCIENTISTS: A History of Science Told Through the Lives of Its Greatest Inventors

As expansive (and as massive) as a textbook, this remarkably readable popular history explores the development of modern science through the individual stories of philosophers and scientists both renowned and overlooked. Prolific popular science writer Gribbin wants to use the lives of these thinkers to show how they "reflect the society in which they lived, and... the way the work of one specific scientist followed from that of another." While he makes this case well, the real joy in the book can be found in the way Gribbin (who has made complex science understandable in such books as ) revels not just in the development of science but also in the human details of his subjects' lives. He writes, "Science is made from people, not people by science," and the book weaves together countless stories of the people who made science, from the arrogance and political maneuverings of Tycho Brahe in the 16th century to Benjamin Thompson's exploits during the American Revolution as a spy for the British and his later life as Count Rumford of Bavaria (in the realm of science, he studied convection and helped discredit the caloric theory of heat). Though the names and discoveries become more and more prolific as the book reaches the 19th century, Gribbin does an admirable job of organizing his narrative around coherent topics (e.g., "The Darwinian Revolution," "Atoms and Molecules," "The Realm of Life"), leaving the reader exhausted by the journey, but in awe of the personalities and the sheer scope of 500 years' worth of scientific discovery. Illus.