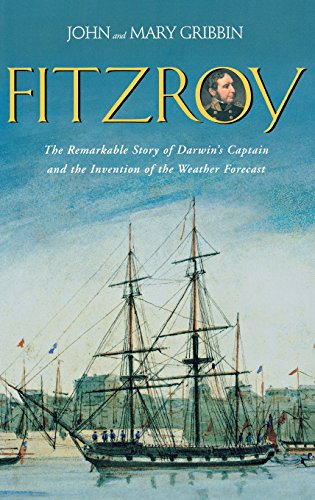 FITZROY: The Remarkable Story of Darwin's Captain and the Invention of the Weather Forecast

History has not looked favorably on Robert FitzRoy (1805–1865), who captained the on Charles Darwin's famous trip around the globe. FitzRoy shared an inclination toward mental instability with his uncle Lord Castlereagh, one of the architects of post-Napoleonic Europe, and ultimately slit his own throat. He became a Bible-quoting literalist on the creation of the world and famously broke with Darwin after the publication of However, the Gribbins ( ) show that FitzRoy was dedicated to public service. As governor of New Zealand he offended colonists in his zeal to be fair toward the native Maoris, which got him quickly recalled. As head of the Meteorological Office he helped put the young field of meteorology on firm scientific foundations by setting up observation stations all around the British Isles, linked to London by telegraph. His network of storm warnings and uniform system of storm signals for use aboard ships were highly successful. Fitzroy was also the first to use the term "weather forecast." The Gribbins successfully pull their subject out of Darwin's long shadow and portray him as a notable figure in his own right. Readers interested in Darwin, meteorology or 19th-century seagoing life will all find this a delightful read. B&w illus.