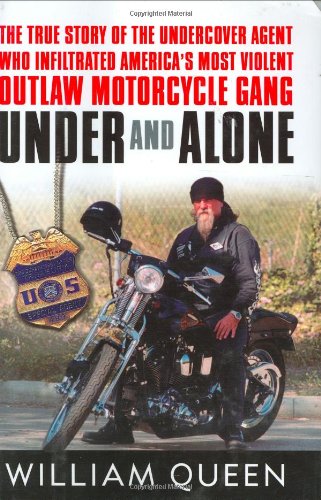 UNDER AND ALONE: The True Story of the Undercover Agent Who Infiltrated America's Most Violent Outlaw Motorcycle Gang

This harrowing, turbocharged account of undercover life is reminiscent of Joseph D. Pistone's . After military service in Vietnam, Queen began his law enforcement career, eventually spending 20 years as an ATF special agent. In 1998, through contact with a "confidential informant," he began to hang with the Mongol Nation, a violent Southern California motorcycle club ("a tight-knit collective of crazies, unpredictable and unrepentant badasses") with 20 chapters in several states and 350 members both in and out of prison. Assuming the role of bearded biker "Billy St. John," Queen entered into a 28-month undercover operation. To gather evidence of homicide, weapons and narcotics violations, he sometimes wore a wire, knowing that its discovery could lead to his murder. Indeed, he was suspected at first of being a cop and forced to prove himself in more than a few dangerous situations. But after months of hazing, he became a trusted member. Queen steers clear of melodrama and captures both sides of his double life; the sadistic characters and criminal camaraderie are contrasted with his own inner turmoil, as he thought of the Mongols as his friends while the investigation escalated. The strength and white-hot intensity of the writing make this read like a movie, and Hollywood is certain to take note. 16 pages of b&w photos not seen by .