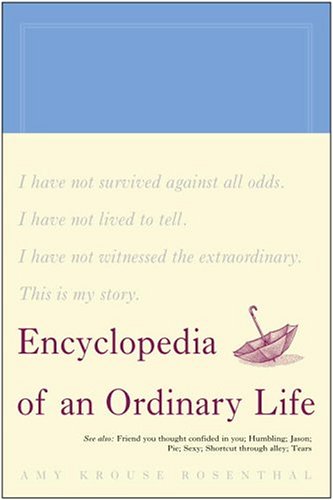 ENCYCLOPEDIA OF AN ORDINARY LIFE

Rosenthal likes lists: of low points in her life, codes that people memorize, sounds that seem loud though they're actually quiet. She loves inadvertently mysterious signs, like this public restroom gem: " PLEASE DO NOT FLUSH EXCESSIVE AMOUNTS OF TOILET PAPER OR SHOES DOWN THE TOILET. THANK YOU." She's collected some wonderful words like "flahoolick"(meaning generous and expansive) and "wabi-sabi" (which seamlessly fuses two moods), as well as some pairs of oddly similar words like applause and applesauce. But what to do with all this trivia? Why, frame it all around some lists of childhood memories and career milestones, alphabetize it and—voilà—she's assembled something like a memoir. Rosenthal warns readers that her life has not been extraordinary in the least—she hasn't "survived against all odds," recovered from any addictions or been a genius, misunderstood or otherwise. Not only does she consider her life "ordinary" (actually, she's worked for ad agencies, written a few books and worked for several public radio stations), but her preoccupations are with the entirely mundane: breaking appliances, leaving messages on answering machines, loading dishwashers, loving Q-tips. Browse this "encyclopedia" in any bookstore, and it looks too cute to resist, especially with its coy, reference book–type illustrations. Whether it remains endearing once it's home depends on how fascinating people find someone else's somewhat ordinary life.