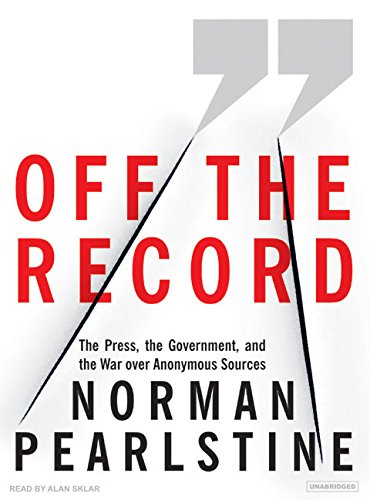 Off the Record: The Press, the Government and the War over Anonymous Sources

Pearlstine, magazine’s editor-in-chief during the Valerie Plame investigation, delivers a detailed account of his decision to urge journalist Matt Cooper to give up his anonymous source (“Scooter” Libby). Despite the criticism he has endured, Pearlstine explains and to a certain degree vindicates himself in this book, accepting responsibility but also fully articulating the complicated situation. Methodical in his explanations, Pearlstine provides an interesting look at the world of journalists, and while the subtitle “War Over Anonymous Sources” is a bit sensationalized, his exploration of media politics proves intriguing. Sklar, undoubtedly one of the best nonfiction narrators in the industry, reads with a hint of a rasp and his soft deep voice delivers the text with perfect emphasis and pause. Though his quoting voice can sometimes momentarily confuse the listener, his smooth cadence easily blends sentences into paragraphs, instilling order to the barrage of words. Pearlstine’s lengthy and sometimes nuanced discussions of law and journalism may feel overwhelming to the reader, but Sklar’s tone navigates listeners into a much better understanding of Pearlstine’s intent.