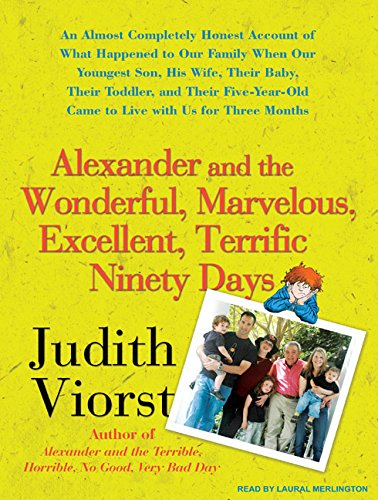 Viorst has her house exactly the way she likes it, with all the fine things that she denied herself when raising three rambunctious sons. But that order is delightfully disturbed when her youngest son, Alexander (the inspiration for her famous picture book), his wife and their three young children return to the nest while their house is being renovated. Her account of the three-month stay, replete with disruptions, awkwardness and wonderfully affectionate moments, is a sweet and mildly humorous testament to a family whose loving bonds are powerfully evident. Viorst intersperses familial anecdotes with musings on modern parenting and its problems, including various approaches to accommodating three generations in one house. Merlington's tone matches Viorst's text perfectly, conveying Viorst's defiant defensiveness about and gentle amusement at her own foibles, particularly her penchants for order and her almost complete inability to repress the sharing of “helpful” advice. This charming minimemoir doesn't break any new ground, but it doesn't have to.