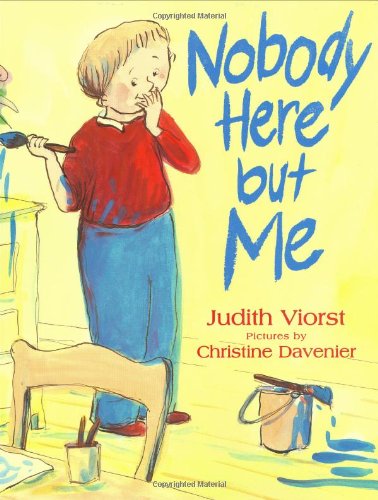 Nobody Here but Me

“Even though there's four—count them!—four other people right here in this house,/ It's just as if there's nobody here but me.” So bemoans a boy who believes that he's being neglected by busy family members (Dad is answering e-mail, Mom is on the phone, and his older sister and a friend are “playing games for two, not three”). The boy's numerous ploys for attention include raising a false alarm (“Hurry, Mom, I think there's a snake in the shower”), acting out (turning the kitchen into a snack-strewn “catastrophe”) and taking to bed at 5 p.m. He's unable to bend others to his will, but finally gets his revenge by playing possum when the family finally checks in on him in bed. Davenier's ( ) luminous watercolors capture the boy's complex emotions with cool lavenders and blues amplifying gloomier moments. (The inclusion of several clocks plays up the agony of waiting and gently suggests a touch of overreaction—the story takes place over the course of an hour.) Viorst ( ), as always, respects her readers too much to preach to them; instead, she empathetically and accurately mirrors their feelings so they can savor the injustice while understanding that it, too, will pass. Ages 3–6.