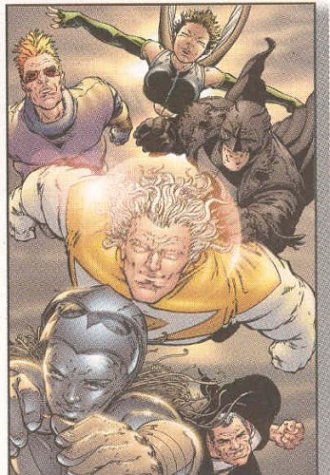 This large-format, deluxe, slipcased compilation of the popular Millar-written issues of ought to be fun for any superhero lover or cynic. It begins with the question, "Why do super-people never go after the bastards?" and sets off to find an answer. The super group The Authority decides to become an independent governing force: they make the law, go after corrupt governments, save refugees and so on. They're also vain, self-absorbed celebrities awash in power and ego. This volume finds The Authority under constant attack for being too powerful. First, in a deft parody of Marvel Comics, a mad scientist with his own super team (based on The Avengers) to promote takes them on. Then, they're faced by a standard villain, and finally, the U.S. government itself, which is fed up with competing for power and attention in the world. Millar is a satirist at heart, but he's sentimental, too—his glib, bloody version of a superhero comic is, in some ways, about a kind of power that doesn't exist (and about the tragedy that superheroes really don't exist after all). Quitely supplies most of the art; he positions his elastic, highly detailed figures and settings in wide, cinema-like panels against black backgrounds, allowing for readability and an easy dramatic progression. His rendering of Millar's gory, real-world battle scenes aren't for the squeamish, but are truly affecting. This series, like before it, turns the concept of superheroics on its head in loving, cynical fashion and tells a mean, fast story along the way. ( .)