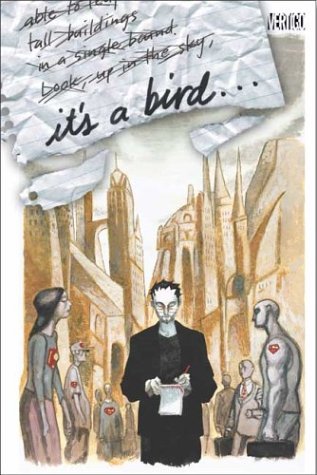 The first rule of metafiction: stories about how the author can't think of what to write about are a bad idea. So a story about a comics writer named Steve who's been assigned to write comics but can't come up with a way to write them seems unpromising. (Seagle wrote the comic for several years.) But Seagle and artist Kristiansen (with whom he collaborated on a couple of excellent books) come through. This isn't a Superman story, exactly; it's an experimental, refracted, semifictional memoir, with Superman—or, rather, the variety of ideas that Superman represents—as its central symbol. Kristiansen's inventive ink-and-watercolor artwork, a bit reminiscent of the Expressionist painter Egon Schiele, gives a crisp, arty look to the sections about Steve's progressively more messed-up personal life and family secret. (The latter has to do with Huntington's disease, the discussion of which here approaches Very Special Episode territory.) Both writer and artist shine on the sections that explore Steve's thoughts about what Superman means: Nietzschean übermensch, synthesizer of primary colors' symbolism, embodiment of benevolent violence, alien who's accepted where others aren't, etc. Kristiansen devises a distinct visual technique for each, often inspired by other 20th-century painters. It's a sweet, clever meditation on what makes the concept of Superman so powerful, and the troubled relationship between powerful concepts and creative narrative.