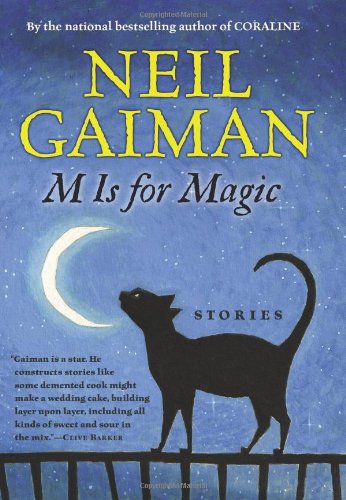 M Is for Magic

Taking both inspiration and naming convention from Ray Bradbury’s and , Gaiman’s first YA anthology is a fine collection of previously published short stories. Although Gaiman’s prose skill has improved markedly since the earliest stories included here, one constant is his stellar imagination, not to mention his knack for finding unexpected room for exploration in conventional story motifs. Jill Dumpty, sister of the late Humpty, hires a hard-boiled detective to look into her brother’s tragic fall; the 12 months of the year sit around in a circle, telling each other stories about the things they’ve seen; an elderly woman finds the Holy Grail in a flea market and takes it home because of how nice it will look on her mantelpiece. Collectors will be pleased to note the inclusion of several stories that were previously published in the now-hard-to-find collection . Also of note is fan favorite “How to Talk to Girls at Parties,” which has been nominated for a Hugo Award for 2007. Though Gaiman is still best known for his groundbreaking comic book epic, this volume is an excellent reminder of his considerable talent for short-form prose. Ages 10-up.