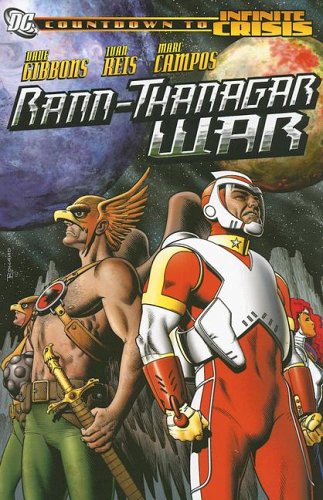 Determined to leave no bit of the events leading up to its much-publicized miniseries undepicted—or unmerchandised—DC offers this action-packed but unengaging tale of interstellar warfare. Planet Thanagar was the home of Hawkman and Hawkgirl before murderous fanatics devastated it. Rann is the adopted home of Earthling superhero Adam Strange. Now refugee cultists are plotting to revive their demon-god, Onimar Synn, the Eater of Souls. Other planets and empires dabble in the struggle, and other second-rank heroes, such as Green Lantern, become involved, too. A lot of stuff happens—yet the overall effect isn't so much high drama as constant, busy fussing. Gibbon's script keeps the actors moving briskly, and efficiently selects details from the overstuffed history of the DC universe, while the team of artists is fully professional in rendering hyper-detailed battle scenes and big panels full of muscular male and female bodies. These stories are supposed to prepare readers for DC's the Infinite Crisis series and a new kind of DC Universe. But there's more perspiration than inspiration here.