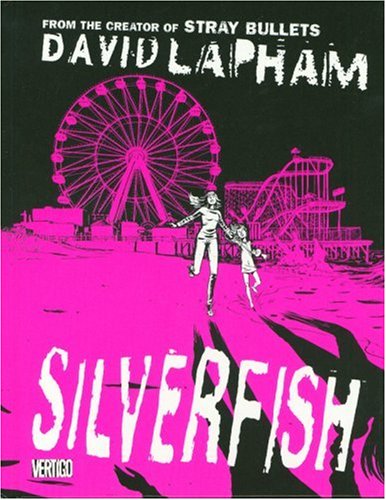 Lapham’s new graphic novel doesn’t stray far from his best known work, the noir comic . Daniel is a killer, a man who believes that silverfish live in his brain and tell him to commit murder. All of his scenes are spectacular examples of creating an uneasy mood. Lapham art is easy to read, but he can also pull off a style for depicting something metaphorical, such as a stream of nasty-looking fish heading toward a man’s brain. But Daniel is not the center of the story so much as a presence that hovers over the action like a storm cloud. The book spends most of its time on teenager Mia, who thinks something is strange about her stepmom Suzanne. Along with her friends, Mia finds some unsettling clues about Suzanne’s past. Story stereotypes like the distrustful stepmother and the clueless dad are too clichéd for someone like Lapham to take at face value. The book sticks close to genre conventions, enjoyable but familiar, with Lapham’s highly expressive noir art kicking it up a notch.