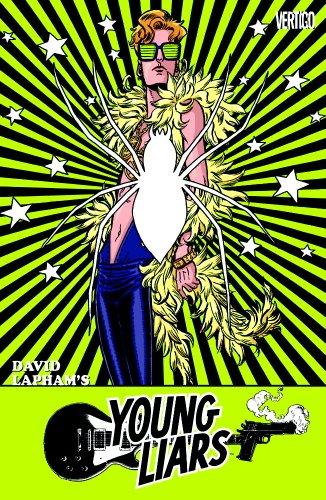 In this second collection from creator Lapham, heroine Sadie Dawkins, whose personality is drastically altered following a bullet to the head, leads her friends on an adrenaline-filled adventure. Sadie's friend, mediocre musician Danny Noonan, is determined to track down the one person who may be able to snap her back to reality: her mother. But he'll have to stay one step ahead of the hit men sent by Sadie's pervert father, the billionaire owner of the Brown Bag Superstore chain. And then there's Sadie's obsession with the idea that “Spiders from Mars” are gathering an army to colonize Earth. At first, Danny is convinced it's all a delusion caused by her brain injury, but the more he sees, the less sure he becomes of what's reality and what's fantasy. Along for the ride are Sadie and Danny's ragtag group of misfit friends: male cross-dresser Donnie, rock star groupie and syphilis survivor CeeCee and cranky bulimic Annie. Lapham's hardcore, post-punk world is a gritty one, full of deviants, liars and killers. And those are just his main characters.