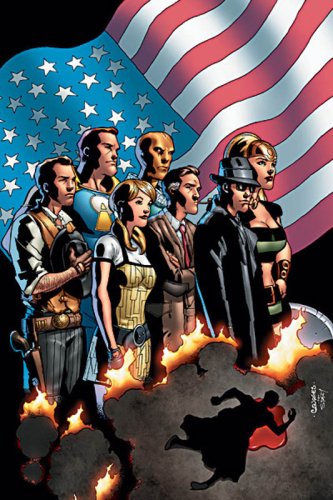 The operative question with is, do we really need another ? An amalgam of Alan Moore's watershed comic and its numerous imitative series, like and , this miniseries is a complicated take on the superhero myth seen through the Cold War politics and civil rights upheavals of the early '60s. The U.S. government has created a team of fake (though some are inexplicably real) heroes who fight fake villains so that the government can appear strong to its Cold War enemies. Protagonist Wesley is a just-fired ad man for cars who is called into service to serve as the propaganda man for the superteam. Needless to say, Wesley's ethics and belief in his country are challenged as he becomes embroiled in the politics and realities of the situation, particularly when an African-American hero joins the team. And even more needless to say, the government's superbeings become unhinged and catastrophe follows. Ridley, whose résumé includes both screenplays and novels, is a competent writer with ambitious ideas, but they often lose focus, especially as the story gets more convoluted, and Jeanty's art is energetic but does little to delineate the many characters. Still, fans of superhero revisionism will find much to chew on.