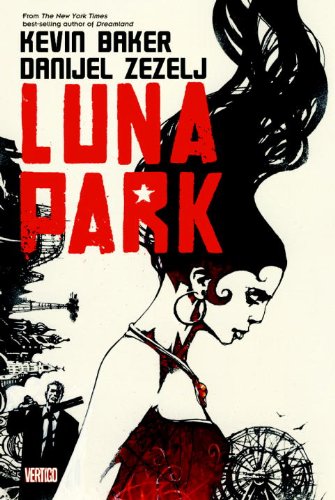 Taking a break (mostly) from his powerful and painstakingly constructed stories of historical New York in novels like and , Baker takes a welcome dive into the graphic novel field with this punchy and ghostly modern-day noir. The setting—today’s rusted and listless landscape of Coney Island—fits the dead-end daydreaming of his protagonist. Alik Streinikov is a former Russian soldier fleeing nightmares of the cruelties he witnessed in Chechnya and now working as an enforcer for a sideshow mob fragment that’s about to get pushed out by a more vicious gang. Alik’s already iffy toehold on society’s ladder is complicated by a serious drug habit and worse addiction to Marina, a hooker/fortune teller whose every card reads like bad news. Marina keeps reminding Alik of his nightmares, and before long he’s spiraling through alternative pasts (from early 20th-century New York to the Russian civil war), which repeat the same inescapable tragedies. The artwork by Zezelj ( ) has a windswept, slashing quality to it that captures Coney Island’s bitter, salty ocean air on the page. A tough-nosed crime story redolent with magic and sadness, serves as a fine showcase for two great artists working to the best of their abilities.