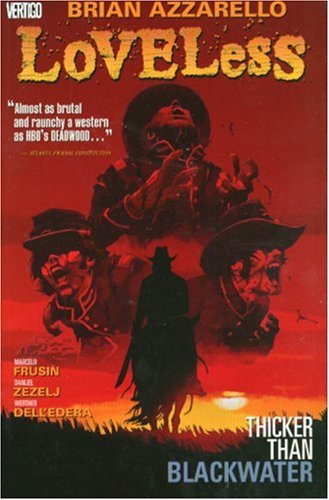 In the title story of this second volume by writer Azzarello of his jet-black, ultraviolent western set in a corrupt Reconstruction-era town, the universally despised, mean-as-a-polecat new sheriff (and former Confederate soldier) Wes Cutter sets about investigating a series of gruesome murders. But the motives and victims are intimately tied to the town's muddy history, and Cutter finds himself targeted as the next job for the undertaker. The main story is preceded by three shorter character sketches, fleshing out Cutter's personal history as well as the backstories of his wife, Ruth, and a former slave turned bounty hunter, Atticus Mann. The stories are built around a series of flashbacks in which colorist Patricia Mulvihill's palette shifts from dusty, twilit tones to sunbaked sepia. The artwork—two chapters drawn by series cocreator Marcelo Frusin, the rest by Daniel Zezelj and Werther Dell'edera—is as stylized and chiaroscuro-laden as a vintage noir movie. What trips up Azzarello's story, though, is its combination of nastiness and understatement—there's a lot more cussing and bleeding than there is exposition. The book's deep shadows, oblique images and thick dialect impede clarity, and it takes several readings to even make sense of the brutal, surprising conclusion.