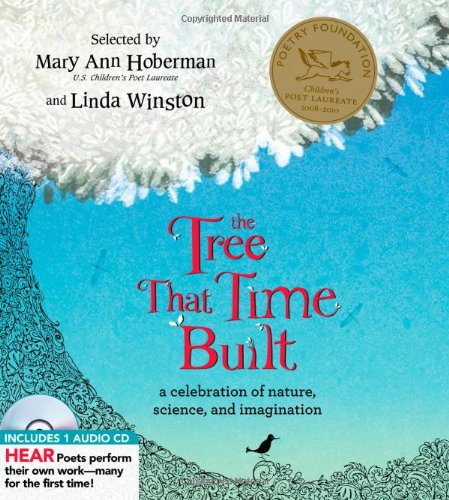 The Tree That Time Built: A Celebration of Nature, Science, and Imagination

“Science and art have often been cast as opposites, but the division is an artificial one,” reads the introduction to this expansive collection of poems about the natural world. Hoberman, current children's poet laureate, and Winston, a teacher and cultural anthropologist, gather more than 100 poems, grouped by subject (prehistory, trees, reptiles, etc.) from such poets as Emily Dickinson, Robert Frost, Langston Hughes, D.H. Lawrence, Jack Prelutsky, and Sylvia Plath, among others (including Hoberman). Footnotes encourage readers to approach the poems both rationally and imaginatively, and a glossary defines scientific and linguistic terms; several poets read their works in an included CD. One provocative highlight is an excerpt from Tomas Tranströmer's , shown in three different translations, underlining the creativity translators employ. Taken in total, the poems encompass nature's multitudinous qualities, from harsher realities (“On my early walk/ I passed the Frog Prince/ dead in a rut of the road,” in Virginia Hamilton Adair's ) to its ability to inspire at its most microscopic, as Ralph Waldo Emerson writes, “Atom from atom yawns as far/ As moon from earth,/ as star from star.” Ages 7–12.