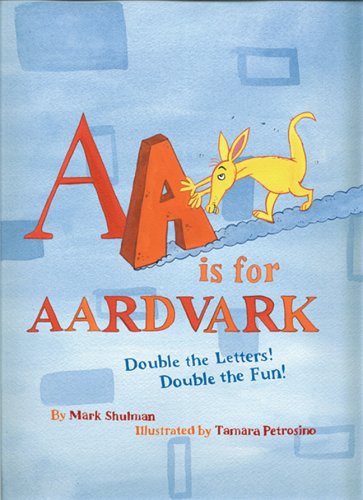 AA Is for Aardvark

Though the tag line splashed across the jacket ("Double the Letters! Double the Fun!) smacks somewhat tritely of a chewing gum jingo, there are indeed laughs to be had in these silly, often inventive pages showcasing words with repeated letters. For each alphabetical offering, Petrosino ( ) conjures spirited, vibrantly colored if occasionally garish cartoon scenarios starring animal characters. The pictures' particulars and the critters' comments reinforce the double-letter notion: on a page declaring "MM is for yummy," a young monkey standing in front of a truck selling "Sammy's Sweets," exclaims, "Mm! Yummy in my tummy!" while another screams, " !" A few of the entries are a bit bland (for the text "OO is for toodle-oo!," depictions of a ghost, cow and owl, respectively utter " !," " !" and " !"). In some cases, author and artist stretch the concept—and do so wryly: "JJ is for 2 jacks," is illustrated by a jack playing card featuring two royal jack rabbits, one of whom comments, "Just joking"; and a follow-up ("QQ is for 2 queens") reveals a queen playing card on which one of two crowned canards quips "Quack Quack!!"—a sly aside reads, "(Hey, it worked for the jacks!)" It's altogether fuNNy, gOOd-natured and agrEEable. Ages 5-7.