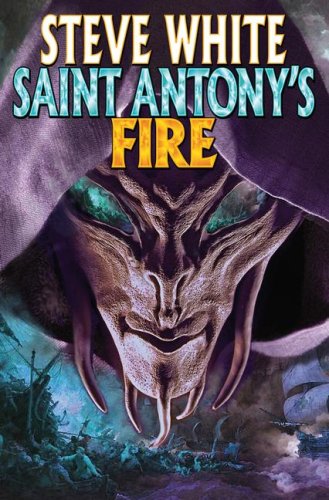 In this alternate history romp, 16th-century Spanish explorer Juan Ponce de León, searching for the fountain of youth, instead finds a crashed UFO and a portal to another world. A century later, Father Jerónimo, an extraterrestrial Grella posing as a monk, is plotting an alien takeover after helping the Spanish Armada defeat the British with antimatter, or “St. Antony's fire.” Capt. Thomas Winslow, merchant adventurer and privateer, whisks Queen Elizabeth to safety in Virginia, accompanied by several notables including astrologer Dr. John Dee and young actor William Shakespeare. There they learn that the lost Roanoke colonists went to a world where 19 years have passed during one year on Earth, and Virginia now leads a war against the Grella. White ( ) leaves the ending open, suggesting more daring and implausible adventures to come.