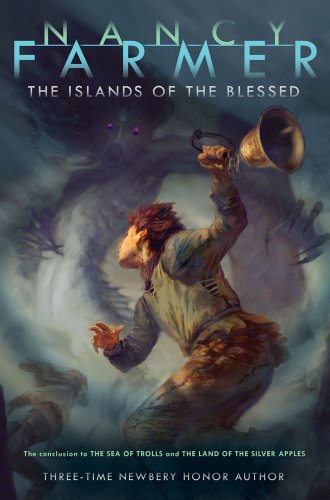 The Islands of the Blessed

This final chapter of the trilogy begun in gathers steam slowly, but has the same enchanting quirkiness of its predecessors. Jack, the apprentice bard, is now 14 and living with Thorgil, the surly shield maiden, and their mentor, the Bard, in his native village after the scarring experiences of their previous adventure. When a draugr, the undead spirit of a wronged mermaid, is roused by the village priest’s mystical bell, her need for justice sends Jack and his friends beyond Saxon lands to Notland, the kingdom of the fin folk, as they seek a way to lay the draugr to rest. Farmer’s prose flows easily and the nuggets of action are as lively and unexpected as ever. But Jack is confronting a knottier lesson than before: the mystery of how joy and sorrow intertwine. While the meditative pace this story’s complexity calls for replaces the narrative drive of the earlier books, it brings other pleasures and creates a satisfying close for the series—if indeed this is the end. Ages 10–14.