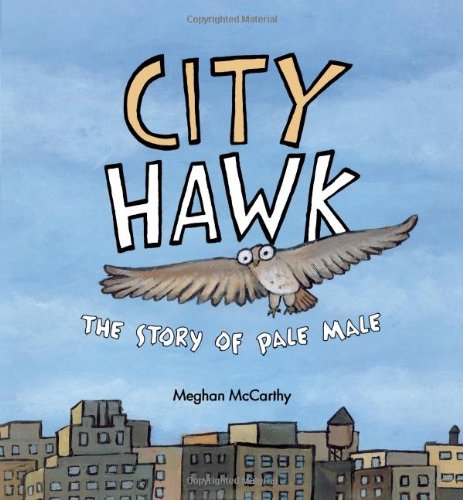 Featuring similarly spare paintings as Jeanette Winters's , McCarthy's ( ) book covers much of the same turf—and air space—as that spring release. McCarthy concisely chronicles the true, reportedly unprecedented occurrence of two red-tailed hawks' construction of a nest in the cornice of a swanky apartment building on Manhattan's Upper East Side. From nearby Central Park, a group of bird-watchers who called themselves “the Regulars” vigilantly followed Pale Male and Lola's every move and rejoiced when two chicks hatched. The other headline-grabbing aspect of these hawks' tale—the building's residents, irked by the birds' messy habits, successfully lobbied to get the nest removed, then, in response to passionate protests, reversed their decision—is explained in a lengthy author's note. Combining vibrant and earth tones, McCarthy's unadorned acrylic illustrations have a puckish quality, both her human and winged characters incarnated as amiable bug-eyed creatures who express themselves through the slant of their mouths (or tilt of their beaks). A portion of the proceeds from sales of this book will benefit New York City Audubon. Ages 4-8.