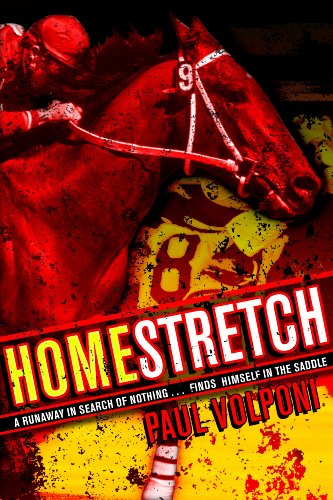 Five months after his beloved mother's death, 17-year-old Gaston Giambanco Jr., aka Gas, runs away from his Texas home and his drunken, racist father's escalating abuse. With no place to go, he winds up in a truck with three Mexicans headed to a racetrack in Arkansas. Gas inherited his hatred of “beaners” from his father, and it's intensified since one played a role in the traffic accident that killed his mother. Predictably, the skilled Mexican groomers turn out to be far more reliable than the racetrack boss, a corrupt trainer who falsifies Gas's ID papers to make him appear to be 18. Volponi ( ) sacrifices plausibility for pacing as, within days of his arrival, Gas, a slight 105 pounds, is elevated from hot walker (responsible for cooling down horses after racing) to race jockey with absolutely no training. Like a six-furlong race, this one's over in a wink, but the healthy message about tolerance gives it some lasting power. Ages 12–up.