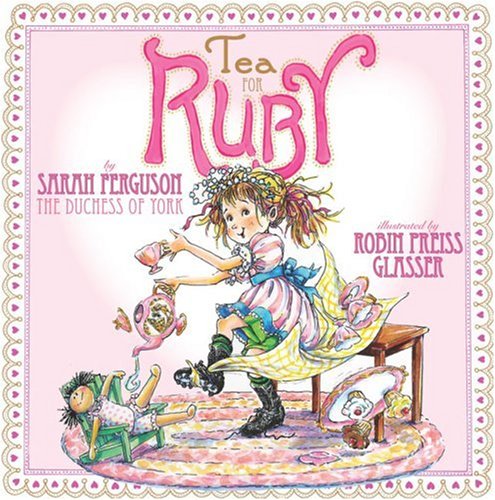 It seems entirely fitting that a book about a girl invited to take tea with the queen carry the Duchess of York's byline. The author shares her etiquette rules for such a scenario via unruly Ruby, whose excitement renders her boisterous and ineloquent. As she repeatedly proclaims, “I've been invited to have tea with the Queen!,” other characters admonish her to mind her various manners: “I hope you won't talk with your mouth full”; “I hope you won't interrupt”; “I hope you'll remember to sit up straight.” Ruby barrels through the bustling pages like a little tornado, hair tumbling, shoelaces undone; it's easy to understand everybody's trepidation. Interspersed with pictures of Ruby's chaotic life are her imaginings of an elegant existence at the palace, depicted in golden line drawings, against which she and the other characters are regally clothed in 18th-century–style garments. The thin plot may disappoint princess-loving readers, especially when the identity of “the Queen” is finally revealed, but Glasser's exuberant illustrations, rendered in her unmistakable Fancy Nancy style, sustain the book's spirit. Ages 4–8.