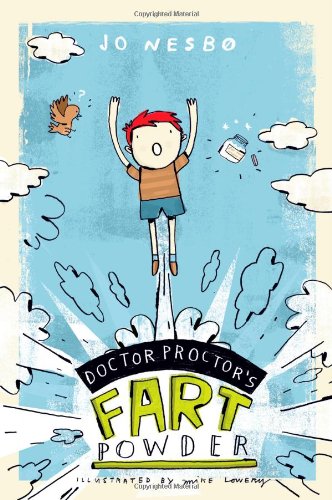 Provocative title aside, Norwegian author Nesbø's children's book debut is a sweet, silly, and often amusing tale. A very small boy named Nilly moves to Oslo, Norway, where he quickly meets the titular mad scientist, who has accidentally invented two fart powders. One provides classic flatulence (albeit without the odor), while the other leads to flatulence so strong that it can propel children hundreds of feet into the air. As Nilly and his new friend Lisa help market the invention, they find themselves at the mercy of twin bullies Truls and Trym and their corrupt father. The over-the-top story eventually ties in the toughest prison in Norway and a vicious sewer anaconda, but Nesbø writes with an appropriately silly tone to justify these twists. The goofiness does eventually wear thin, but Nilly's oversize tall tales, Lisa's common sense, and Proctor's insane inventions should charm younger readers, even those who might be disappointed that the book isn't quite as gross as the title implies. Final art not seen by . Ages 8–12.