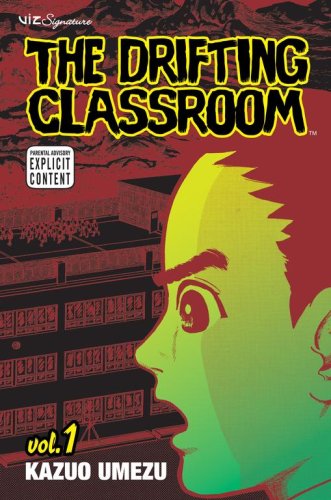 Horror-manga legend Umezu ( , ) can create a sense of dread with just the sheer volume of black ink he puts on the page—white space is at a premium, shading is aggressive, and the result is an ominous atmosphere that affects the reader before the story even begins. originally published in 1972, tells the story of sixth-grader Sho, who has a bitter fight with his mother before leaving for school one morning; later that day, his entire school vanishes in a violent earthquake, transported to a mysterious desert. When a girl falls to her death, teachers and students begin to panic. Nerves continue to unravel when the school's inadequate food supply is discovered. Umezu makes powerful use of two-page spreads, devoting many of them to single, large shots—the school building against the desert backdrop, the massive sound effect that accompanies the earthquake, an extreme close-up of a teacher with a head wound—the result is extremely disturbing. This first volume solves few of the plot's puzzles, ending just as the kids are veering into territory. This is a great rediscovery of a classic title, echoes of which can be seen in modern horror manga like