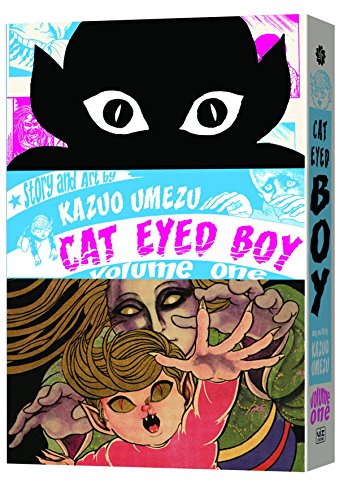 An earlier work from the creator of , this 1967 series is an anthology of horror short stories by the man known as the master of horror manga. The cat-eyed boy narrates some tales as be observes them; in some he's a direct participant. The third and most interesting tale, “The Tsunami Summoners” recounts the events surrounding the cat-eyed boy's birth. The first two puzzling chiller tales feature monster men as well as men who become monsters, but the stories lack any moral message, which might place the book as comeuppance theater. No one gets revenge or learns a lesson, and the monsters' inner lives are just as evil as their outward grotesque appearances. The cat-eyed boy casts no moral judgment on the people who pelt him with rocks even as he tries to save a town from tsunami-summoning monsters. Umezu excels at drawing cute but totally shocked school boys and the grotesque monsters that scare them, but his art is hypnotic in its juxtaposition of the two. Two giant volumes of the series are being released on the same date—a date that fans of classic Japanese horror should have circled in big letters. (Reviewed from a partial galley.)