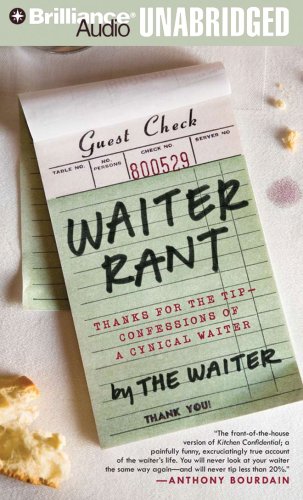 Anonymity is tough to maintain when you want to do a book tour. Such is the case with Steve Dublanica, a seminary dropout and laid-off psychiatric worker who, in 2004, started , blogging as “The Waiter.” His brutal observations on waiting tables at an upscale restaurant he called “The Bistro” (outed as Lanterna Tuscan Bistro in Nyack, N.Y.) are expanded in this entertaining audio. Dan John Miller is pitch perfect not only as the Waiter—who devolves from woebegone rookie into jaded veteran—but also as his customers, co-workers, bosses and brother. Miller's vocal interpretation dovetails seamlessly with the material. He shines when the Waiter is dishing it out, but even more so when he's taking it. Miller's performance is enthralling during passages in which he reveals his crippling self-doubt, overwhelming sense of underachievement and acknowledgment that he's become somewhat of a jerk.