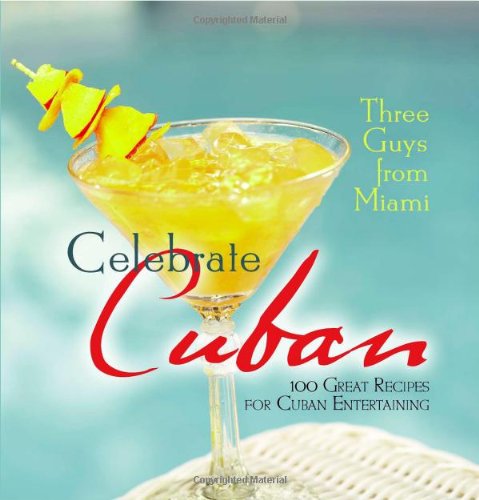 Actually, it's two guys from Miami and a Minnesotan who just winters there (Lindgren). The semi-wild and mildly crazy trio are back with their second effort (after ). It features 100 new party-friendly creations and page upon page of less than stimulating banter laid out as marginalia opposite each recipe ("Milk has always been thought to provide some comfort for an upset stomach"). Still, it's hard to dislike a cookbook that puts the desserts at the beginning. Cake de Cuba Libre is the most effervescent of the batch, with rum and Coca-Cola in both the batter and the accompanying sauce. Standouts among the various soups and main dishes include Sweet Plantain Soup, Cuban Wedding Shrimp in a sauce of rum and orange juice, and traditional pork chops with plenty of garlic. The authors are willing to Cubanize at will; there is Cuban Style Lobster (with Chorizo), Cuban Stuffed Turkey (with a rice and bean stuffing) and Cuban Baby Back Ribs (with Guava Sauce). The many full-page color photos make all the recipes look mouth-watering; less appetizing are the shots of the Three Guys in loud shirts or staggering down a beach.