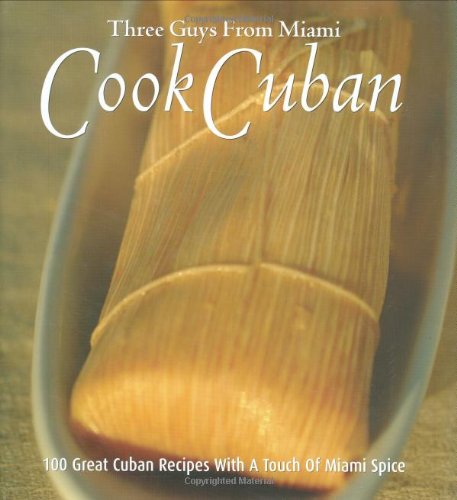 This cookbook boasts solid renditions of Cuban dishes, but readers will have to suffer through the cheesy repartee among its three authors, who have a Cuban culture Web site, www.iCuban.com. A brief introduction entices with information about Cuban migration to Miami, but margin notes to the recipes tend toward repetitious and obvious exchanges. A recipe for Fried Stuffed Potatoes, for example, begins with Raúl commenting, "This is one Cuban snack that if you haven't tried, you probably don't know what in the heck it is." Still, the food itself is alluring. Avocado and Pineapple Salad is refreshingly unusual, and marinating Cuban-Style Skirt Steak in a mix of onion, herbs and sour orange juice before grilling delivers maximum flavor with minimal work. The authors nicely cover savory snacks like Cornmeal Pancakes, numerous types of empanadas, and Plantain Chips. They also remain true to authentic Cuban cuisine by not skimping on the frying, though fat-phobic Americans will probably avoid the Fried Pork Chunks. Occasionally the recipes slip into a cutesy tone (one for Cuban Bread cheerleads, "it's a little sticky, but you can do it!" then begins a later step with, "When you return from the pool..."). Overall, this effort stands out less because of its appeal than because it has so few competitors.