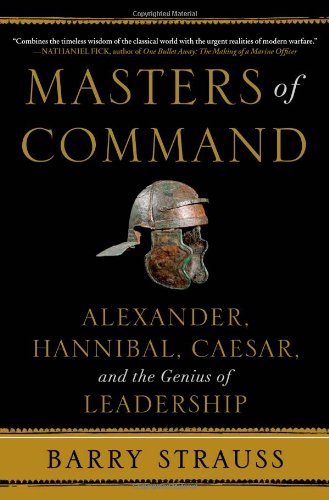 Masters of Command: Alexander, Hannibal, Caesar, and the Genius of Leadership

Celebrated and larger-than-life military heroes and captivating masters of political intrigue, Alexander the Great, Hannibal, and Julius Caesar, each developed reputations as master strategists and commanding battlefield generals. As Cornell University classicist Strauss (The Trojan War) deftly points out in this entertaining set of stories, each of the three leaders was not only a field commander but also a statesman. Retelling their lives in rich detail, Strauss compares and contrasts how each man successfully navigated the five phases of war—attack, resistance, clash, closing the net, and knowing when to stop—and why they failed in their ultimate goals. Although, Strauss says, Hannibal was the worst strategist, he was the greatest commander on and off the field; Alexander negotiated the phases of war brilliantly, but failed to lay the foundations for a successful, stable postwar empire; Caesar had deep insight into the stages of war, and although often arrogant as a postwar leader, he came the closest to great statesmanship, fostering good relations among former enemies and friends. Strauss identifies 10 qualities—some admirable, some not so admirable—that underlay their success, such as ambition, judgment, audacity, inspiring terror, and belief in “divine providence.” 8 pages of photos, 6 maps. Agent: Cathy Hemmings, Cathy Hemmings Literary Agency. (May)
close
Details