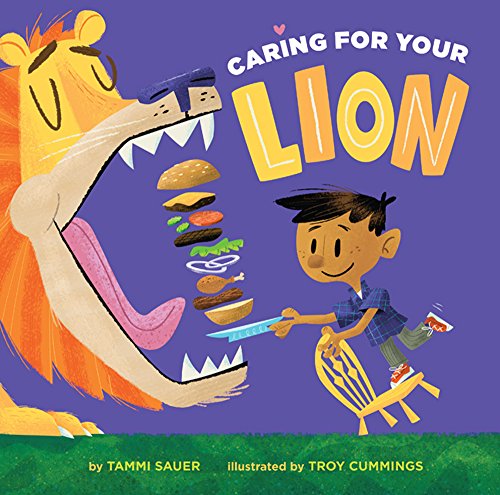 Caring for Your Lion

It’s a common enough problem: ask for a kitten, receive a lion instead. Luckily, Sauer (Mary Had a Little Glam) has readers covered in this step-by-step guide to a singular pet, which adopts the dry tone of an owner’s manual. Countering that deadpan writing is Cummings’s (Little Red Gliding Hood) boisterous artwork, a mix of schematic-style diagrams and vividly exaggerated cartoons starring a boy and the enormous yellow lion that arrives in a crate. “Try very hard not to look like a zebra. Or a gazelle. Or a bunny,” advises Sauer in step three; Cummings shows the boy frantically covering up his rabbit T-shirt. If one does accidentally get eaten, worry not—a simple, tickle-inducing feather is all that’s needed to remedy the situation, a process depicted in a series of Ikea-esque labeled diagrams. Humorous details are everywhere, from the stack of pizzas delivered to satiate the lion (toppings include rhino and antelope) to the lion’s house-cat-like tendency to sleep in sunbeams and on top of the fridge. Ages 3–up. [em]Author’s agent: Laura Rennert, Andrea Brown Literary. Illustrator’s agent: Ronnie Ann Herman, Herman Agency. (May) [/em]